Television specials, magazine covers, and internet blog posts; Princess Diana is front and center in the public eye once again. It has been 20 years since she passed away, but as August 31 approaches, once again everyone takes time to remember the woman we called the People’s Princess.

August 30, 1997, Princess Diana is 36. She is returning from a vacation in the Mediterranean with boyfriend Dodi al-Fayed. The pair decides to stop for a night in Paris before returning to London. They spend their evening at the Hotel Ritz Paris, which is owned by al-Fayed’s father. At around 12:30 AM on August 31st, they decide to depart the hotel and head to an apartment the al-Fayed family also owns in Paris. Paparazzi are standing out front of the hotel; they have been swarming the couple since their plane touched down earlier in the day. A black limousine leaves the front of the hotel, the paparazzi give chase, but this is the decoy vehicle.

Minutes later a second black limousine departs the hotel, this time from the rear entrance. This is the car carrying Diana and her boyfriend. Along with a driver (who is intoxicated) and a bodyguard in the front seats, the car leaves the hotel. Paparazzi are wise to this and begin to chase the vehicle. The car speeds through Paris eventually crashing into The Place de l’Alma underpass.

Princess Diana survives the crash and is rushed to the hospital. Around 4 AM she succumbs to her internal injuries and is pronounced dead.

In the days that followed her untimely death, the public grieved the loss of their beloved princess. Seas of flowers were placed outside the gates of Kensington Palace as people mourned her loss.

Her funeral was held a week later on September 6, at Westminster Abbey. The service was broadcast on British television attracting an audience of over 32 million viewers. After the service ended, a private burial was held for the family as she was laid to rest on an island in the Althorp Estate. 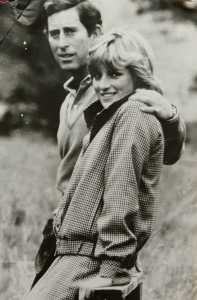 Before her death, Dianna was beloved and adored by millions around the world. She was born Diana Spencer, to a family of British nobility. After finishing school, she moved to her mother’s flat in London and worked several different low paying jobs.

She first crossed paths with Prince Charles in 1977 while he was dating her older sister, Lady Sarah. It wasn’t until their paths crossed again in the summer of 1980 that the prince took an interest in her. The relationship progressed quickly over the next few months. It was in November of 1980 that she was first introduced to Prince Charles parents, Queen Elizabeth II and Prince Phillip. The royal family well received her and Charles proposed to her in February 1981.

Diana’s engagement to Prince Charles was quite a historic event. Not only was she the first Englishwoman to become the spouse of an heir apparent in 300 years; she was the first royal bride ever to have a paying job before the engagement.

On July 29, 1981, the pair held their fairytale wedding at St Paul’s Cathedral. The event was viewed by more than 750 million people around the world with 600,000 people lining the streets outside the church.

After becoming the Princess of Wales, Diana became the third highest female in the United Kingdom. The couple made their home at Kensington Palace. Together, they had two children William (1982) and Harry (1984). As a mother Diana was more involved with her children’s upbringing than was typical for members of the royal family. Rather than using the Royal Family nanny, Diana dismissed her and hired someone else. She was also responsible for selecting the boys’ clothes, their schools, planning their outings and taking them to school herself. She would plan her public duties around their schedule and aimed to give them a more normal experience than most royal children receive.

The End of The Relationship

Eventually, the couple’s relationship began to deteriorate leading to extramarital affairs and divorce. Many have blamed the couples difference in age (13 years) and incompatibility as the reasons the marriage began to end so quickly. Within five years of being married, the couple started to show signs that the marriage was over. As early as 1985, Prince Charles resumed an affair with Camilla Parker Bowles whom he had had an on and off relationship with since the early 1970’s. Princess Diana also began an affair with Major James Hewitt for a period between 1986 and 1991. Both affairs were made public in the 1992 book Diana: Her True Story. The book launched a media storm which was followed by the release of intimate phone conversations between both Diana and Hewit and Charles and Camilla. In December of 1992, Prime Minister John Major announced to the House of Commons that Diana and Charles had agreed to an amicable separation.

As the demise of the couple’s relationship played out in the public eye, both spoke to the press through their friends and tried to portray the other as the reason for their marriage problems. In both cases, the pair claimed that their affairs began after the marriage had broken down and was unrepairable. During a 1995 interview, Diana claimed to have suffered from depression, bulimia, and self-mutilation during her marriage to Charles.

In 1995, Buckingham Palace announced that Queen Elizabeth II had sent letters to both Diana and Charles recommending that the two file for divorce. The divorce was finalized on August 28, 1996, with Diana receiving £17 million settlement as well as £400,000 per year.

During her time as the Princess of Wales, Diana undertook many important royal duties and was celebrated for her charity work. Diana routinely represented the Queen at numerous events overseas. Her charitable work included supporting the International Campaign to Ban Landmines, the Landmark Aids Centre, various cancer charities, and much more. She worked alongside several major charities to assist with fundraising and spread awareness for their causes.

Life After The Divorce

Throughout her marriage and after, Diana was considered to be a style icon by millions of women around the world. Whether it was her hairstyle or choice of clothes, women everywhere tried to emulate Diana’s style. During her marriage to Prince Charles, she wore clothing that met both the Royal Family’s demands as well as her tastes. Following her separation and divorce, she began to grow more confident in her choices and took influence from other celebrities like Cindy Crawford and Madonna. She was named to the 1989 International Best Dressed List Hall of Fame, and in 2004 was recognized by People magazine as one of the most beautiful women of all-time.

Today, Diana is still considered by many to be one of the most popular and influential members of the Royal Family. Whether it was because of her compassion, charisma, style or charity work; she has continued to be loved by millions around the world. Not only is she remembered for her charitable work and dedication to others, many often described her as a devoted and loving mother to her children. She truly was the people’s princess and queen of hearts.

This entry was posted in Celebrity Deaths on August 29th, 2017 by ObitTree .